Maybe you weren’t planning on asking for new pans this Christmas… But if your pots and pans look anything like the stuff in the picture above, you might want to reconsider writing a letter to St. Nick.

(P.S. Santa, do you prefer grain-free cookies with your raw milk?)

If your kitchen cookery DOES look like the stuff above, don’t fret. There is hope. That is actually a picture of all the stuff that was in my kitchen that I got rid of this year. Now, I am happily cooking with better alternatives, and NO, it isn’t any more work!

If you are one of the millions of people still using non-stick pots and pans, did you know that every day you are exposing yourself and your family to hidden toxins? Non-stick cookware is made using a carcinogenic chemical called perfluorooctanoic acid (PFOA) and coated with a synthetic polymer called polytetrafluoroetheylene (PTFE). Every time you heat non-stick pans, they emit toxic gases (PFIB), which are released into the air and you inhale. It only takes five minutes for six toxic gases to be released. These gases are known to kill birds, and people that are more sensitive to them and actually get something called “polymer fume fever,” which produces flu-like symptoms.

You may have noticed that non-stick pans also tend to wear out over time, resulting in flaking and chipping in the surface of the coating. While the non-stick surface is supposedly “safe” to ingest when it’s not heated (not sure if I believe that…), it does pose a problem with exposing the aluminum underneath. My first year in college, my roommate bought the Walmart-brand Mainstays aluminum cookware because it was cheap. On day one, the skillet was used to cook a steak on medium heat. But what ended up happening was (1) the kitchen filled with smoke (i.e. toxic gas!), (2) the steak was ruined, and (3) when the pan was lifted off the stove, there was a hole burned clean through the bottom. I’ve never seen anything like it. It was nuts.

While aluminum is found in the earth’s crust and thus could be considered “natural,” it can do long-term damage in your body and your brain. The fact is that your living cells have absolutely NO USE for aluminum.

Aluminum is a known neurotoxin, and has been linked to numerous degenerative brain disorders, including Alzheimer’s disease, multiple sclerosis, Parkinson’s and ALS. It is also a possible risk factor in breast cancer due to increased aluminum exposure via antiperspirant deodorants through the underarm. And because aluminum can set up shop almost anywhere in your body, it can—

For YEARS, almost TWO DECADES, I suffered from what we thought was eczema. At first it started under my eyes and moved to the insides of my elbows and knees. Within the past 5-6 years, it has been concentrated mainly on my feet and occasionally on my hands. It manifested as tiny, painful, and itchy blisters that made walking almost unbearable at times. My feet would overheat and turn bright red from the rash. I was embarrassed to expose my ugly feet by wearing sandals. But closed-toed shoes, along with any type of heat, just aggravated the rash further. For years, I’ve taken luke-warm or cold showers.

In high school, I tried to get rid of eczema naturally by selectively eliminating things from my diet. One at a time, I stopped eating grains, sugar, dairy, etc. But nothing seemed to help. It was only this year in August, that we discovered I was actually reacting to aluminum! We immediately got rid of anything in our house containing aluminum—(Did you see that I also JUNKED OUR BATHROOM?)—and within a WEEK, my skin had cleared up. I haven’t touched anything that could even POSSIBLY be aluminum since, and my skin hasn’t broken out again. It feels like a total miracle.

Back to cooking. So what do I use now?

While I’m sure most of you have cooked with stainless and glass (at least once!), more of you might be unfamiliar with cast iron. The good news is that cast iron comes in SOOOO many options these days. :) This is not the cast iron that your grandma used. (Although, MY grandma has a seasoned cast iron pan she’s had since my grandfather and her married, that I am very jealous of!) Most of today’s cast iron can comes pre-seasoned or enameled, which means it is naturally non-stick! You don’t need nasty chemicals for non-stick cookware. Cast iron is tried and true! And Frank likes it because it’s “man-proof.” He loves that he can actually use his fork to scrape the pan and not worry about scratching the cookware. ; )

I love my cast iron pans because they heat evenly, and they work efficiently on very low heats. Even when frying things, I never have to go above medium heat on the stove. Clean-up is a breeze. It took me about a week to “break-in” my pans, but after using them a few times, now not even eggs stick! I use my large and medium skillets so much that they never even leave my stove top. And here’s a nifty trick for you: if something does stick to the bottom of the pan, simply cover the bottom with water and boil it for 5 minutes. Whatever is stuck should lift right off! But always make sure you dry your pans after washing and avoid washing with soap, as it can mess up the seasoning.

The biggest thing I miss is probably my cake pans.

As you can see in the first picture, there are two round cake pans sitting in that junk pile. When I junked my kitchen, the non-stick pans had to go. (They didn’t work anyway, as I always had to line it with parchment paper!) I don’t want to spend the $20 to go buy glass ones yet, and I made a cake yesterday in my 9″x13″ glass casserole pan that tasted just the same anyway. ; ) Frank didn’t complain.

I’ve also had to learn to find alternatives for aluminum foil. For baking, I’ve used banana leaves and glass lids. For storage, I simply use a tupperware or plastic wrap.

But what about the cost?

Yep. It’s going to cost a little bit. But you’ll quickly find you can be creative!

Look on Craigslist for used cookware. Frank and I found our large red cast iron skillet on there for $10! TEN BUCKS! That’s fantastic, and all the more reason to love it. Every time I cook with it, I feel like I won something because it was such a great deal. It also has deeper sides than your typical skillet. Just another reason it stole my heart.

We also junked our rice cooker, and when we did, we felt totally ridiculous! Now, we cook rice in a stainless steel pan on the stove, and guess what. IT DOESN’T STICK. Remind me why we used a non-stick rice cooker again? 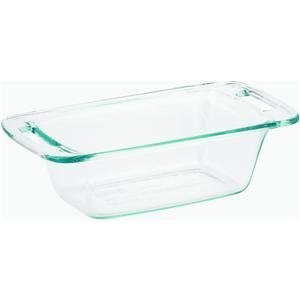 The bread pans also had to go. But lucky me, my local grocery store sells Pyrex glass loaf pans for $5 a piece, AND they last pretty much forever (unlike non-stick stuff). As for the non-stick part? Simply grease up the sides with butter, and they work BETTER than any chemical coating! Not to mention, my bread tastes better (from the butter!).

As for the baking sheets, they have stainless steel and stoneware baking sheets, both of which you could line with parchment paper or buy a Silpat mat to prevent sticking.

Take the JUNK YOUR KITCHEN challenge with me,
and be a healthier, stronger YOU!

The most surprising ear infection remedy (that you already have)
January 2, 2018